DIFFERDANGE, Luxembourg — I get that fluttering feeling. No, not puppy love.

It’s the “I’m leaving again on an adventure” flutter.

That’s what happens when I decamp my comfortable, happy life in Cincinnati for Somewhere Else. A week ago I left Ohio for an adventure that will last a year.

And I can’t say I was sorry to rush the hell out of Trumplandia to a nice, sensible country like Luxembourg.

I’ve spent 3+ years of my 50+ years living outside the continental U.S., and not all of it has been nice and sensible.

Eighteen months in Japan and Korea with the U.S. Army, including the worst night of my life patrolling near the DMZ in sub-zero weather.

Fourteen months in Hawaii, which felt completely foreign because I was a minority and culturally clueless. And because I eventually tired of all that sun, sand and blue skies in paradise stuff (hello where are you autumn?).

A cumulative 5 months teaching in Italy, and a sprinkling of weeks in Costa Rica. That latter trip in early 2016 took me months to recover from. The dearth of sleep was one thing, but the heat and humidity seeped into my leg joints and psyche, leaving them groaning.

But I’m not here to whine about tramping around the jungle.

I’m just happy to leave the jungle that is America today. In many ways, it is not a country I recognize anymore.

After the recent Charlotte hate rally, my friend the writer Maggie Downs wrote on Facebook: I’m sure these garbage humans will calm down once pumpkin spice latte season starts, but at least we see their faces first. Take a good look. These thugs scare me more than anything else happening in our nation.

My thoughts exactly, but my voice feels paralyzed.

I’m counting on a year working and traveling in Europe to loosen my writer’s block. God, I enjoy writing so much. But, see – I hadn’t even posted on this blog since last fall! And so I am thrilled to teach for Miami University’s Dolibois European Center and for the university’s Florence, Italy, summer program in 2018. 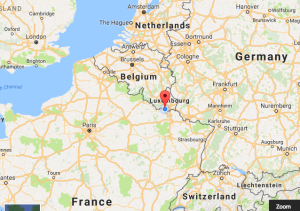 During our first week of class here in Differdange, we read Pico Iyer’s classic 2000 essay in Salon, Why We Travel: It Whirls You around, Turns you upside down and Stands everything you took for granted on its head.

One of the passages in that essay that has stuck with me through the years is:

On the road, we often live more simply… with no more possessions than we can carry, and surrendering ourselves to chance. This is what Camus meant when he said that “what gives value to travel is fear” — disruption, in other words (or emancipation) from circumstance, and all the habits behind which we hide. And that is why many of us travel not in search of answers, but of better questions.

I was in Kosovo – the world’s youngest democracy – this summer. At a café on Mother Teresa Boulevard in Pristina, a friendly but melancholy waiter named Pjeter asked me, “Why? Why did Americans vote for Donald Trump? We are very worried here. What will become of us?”

America has been a steadfast supporter of Kosovo’s bid to become a fully recognized independent country, an EU and NATO member. On the drive from its airport to its capital, you will see a 3-meter statue of President Bill Clinton.

I don’t believe Donald Trump knows where Kosovo is, or that more than 11,000 soldiers and civilians were killed during its bloody separation from Yugoslavia in 1998-99. The U.S. just sent a fresh round of troops to Kosovo as peacekeepers.

And it was peaceful in Pristina when I visited. A predominately Muslim nation with a secular constitution where people are polite, erudite and concerned about America.

I just don’t have an answer for Pjeter.

The World is not Flat

So why do I travel? Honestly, this “trip” feels different. Beyond yearning to report and write, I think I’m here in Europe so I can submerse in people vastly different from Americans. To feel good about democratic values again. To have empathy, instead of anger.

In Perugia, Italy, this summer, I met a migrant youth, somewhere between 10 and 14. He was selling handmade string-and-bead bracelets to tourists taking the traditional evening passeggiatta stroll. Each night he gave me a different name for himself — Mohammed, Mike, Malachi. He said he was from Kenya, Ivory Coast, Liberia. “Where is your family?” I asked. “My mother is in England,” he said one night, “Rome” another night. Lastly, “America!” delivered with a big smile.

The Perugians and others on passeggiatta looked on disapprovingly as I talked with Mohammed, Mike, Malachi. Several watched closely as I bought one of his bracelets for 5 Euro.

I left that bracelet in Cincinnati. The city needs more empathy toward its poor, marginalized, needy. I’ve given lots of money to the homeless on the streets of Cincinnati. Giving money to Mohammed, Mike, Malachi felt different. He smiled. I smiled back.